My name is Phoebe Hagan, I am 25 years old and I am an IFBB Bikini Pro

I have always been into fitness since I was in school and always done some sort of sport… running, swimming, basketball, cheerleading, dance, gymnastics (to name a few) but my main sport I fell in love with over 5 years ago now was Bodybuilding. I have competed in over 25 shows in 4 years & earned my IFBB Pro card in June 2018.

Bodybuilding has given me this amazing drive and passion to help better myself and other people. It has given me opportunities I could only have dreamed of doing & still can’t believe I have done. I have featured in BBC Three programmes twice (Get Muscly in a Month & The Bikini Bodybuilder | Phoebe Hagan) explaining all about my passion

The best part about this sport is giving back. I love helping others make themselves feel confident with their stage presentation. I have been a posing coach for over 3 years & posed 1000s of bikini girls. It’s all about confidence. Once you give someone that, they feel like they can do anything which I love being a part of.

I am honored to say I am a bodybuilder and am grateful to represent the U.K professionally within this sport

I love the bodybuilding game. I've been an international athlete for the UK in the 110mh in the past. I've boxed at the ABAs and have trialled with a number of pro and semi pro soccer and rugby clubs. Bodybuilding has always been a passion of mine throughout my sporting career. Additionally i love the stage presence needed to showcase all the hard work that's been put in leading up to a show. It's what i call the icing on the cake, which plays an important factor. I love giving back to the sport that has given me so much over the years! 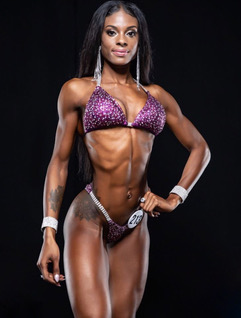 I first started competing in late 2014 after training myself for 2 years, my ultimate goal was to become an Ifbb pro league bikini athlete, in 2017 after winning the ukbff British championships my dream came true.

In 2018 I was part of 2bros pro events posing seminars which became very successful as my classes were always fully booked.

I have continued to teach posing 1-1 and in group sessions up to this current day, I also hold group posing seminars at my local gym in Beckton, London.

I have competed in a total of 13 shows including 3 pro shows with my highest placing at a pro show being 4th place, I will be preparing to compete again in 2021.

As a full time personal trainer and posing coach, I have a true love for training and the world of competing. Over the last few years I’ve managed to help many ladies improve their overall confidence, stage presence and flow on stage.

My name is Samson Dauda and I am an IFBB Professional Bodybuilder currently living in the UK.  I started bodybuilding in 2014 when I did my first local show at 5ft 11inch tall weighing 102kg and since then I never looked back again. Looking forward, in 2017 I won my Pro card and I did my pro debut in EVLS Prague 2018, where I placed 5th.

During my first year as a professional bodybuilder I placed as high as the second place in the British Grand Prix 2019. One of my biggest strengths is my aesthetic structure, big frame and great symmetry while being 124kg stage weight. I am also very well known worldwide for my posing and captivating stage presence. I have been compared to the likes of Shawn Ray, Flex Wheeler and Kai Green.

I am an ex ballerina for the Royal Academy of London with 16 years of practice of Classical Ballet and Jazz. I am a Personal Trainer based in central London and an IFBB Bikini Pro. I have been on the competition scene since 2013. In addition to that, I can speak 4 languages and have a Master degree in International Hospitality Management at Brighton Uni. I am a very active and easy going person and I love helping and motivating people achieving their goals and succeeding, it makes me very happy!!

Been competing since 2009, in a number of different categories

Competed at a high level, the highest being the Olympia stage in 2016 (Men's Physique)

I competed as a Fitness model, Muscle model and Men's Physique competitor over the years.

My name is Rhea Gayle and I am an Online Coach, IFBB Figure Pro and Olympian. I have always been involved in sport through the years from gymnastics, to diving and now competing as a figure athlete. From the moment of standing on stage for my first ever figure show in 2016 my passion for this sport has just increased year on year.

Upon turning professional in June 2018, this was one of the best moments of my life, it wasn’t just a status for me, it truly meant to me that anything is possible with passion, drive and hard work. It also meant to me that is was time to level up with my mentality and physique, also to become a positive role model and represent the sport in the best way possible.  I am so passionate about this industry. I love to give back to the sport in which has given me so much and presented me with so many opportunities, alongside my own training and competing I also love helping athletes with their mindset, posing and stage presentation, bringing the best out in them.

My name is Jack Connor and I live in Southampton. I've been competing for 5 years across all federations with multiple wins and overalls to my name.

Once classic physique landed in the UK I was hooked and will making my pro debut next year.

Posing is about flow, confidence and using all your tools to your advantage to show the very best of yourself on stage. It's not always easy to spot your own strengths and weaknesses, so a keen eye is needed to present all that hard work. Let me help!!!

My name is Kerry Sexton I am an IFBB Bikini Pro

Body building has been my passion since 2016, I have competed in 23 shows in total, 6 being IFBB amateur Pro Qualifier shows in 2019 where I competed almost back to back each week over 8 weeks giving my best effort to turn Pro, I took 6 class wins & wasn’t going to stop until I achieved the goal I set for that year being to turn Pro – now proudly represent the UK & 2Bros As an IFBB Bikini Pro.

I have been a posing coach for over 3 years now, and nothing makes me happier than helping others in this sport & seeing the progress in not only of course my clients posing as that is the goal, but also the confidence in the ladies I help. Mind-set plays such a huge roll in this sport so I also feel strongly in helping my clients develop this to, by helping them realise they can feel confident in their body, and they can bring out that sass that they want & need on the stage.

My achievements with the NPC/IFBB in 2019

In total across other competing history I have taken, 16 show wins to date.

An Event Promotion Company dedicated to bridging the gap between amateur athletes achieving professional status in the IFBB Pro League.